Disneyland Paris and D of E

I went to Disneyland Paris in France, we went on the euro tunnel in the car from folkstone to Calais.

When we got there we went in the Disneyland Hotel to check in, a ladey gave me a birthday card from micky and the charicters. We went up to the coffee launge on the upper floor and had a drink.

After we went to Walt Disney Studios and went into the park and then we tried to find a ride sootible and we went on Aladdin and it was good with the ramp and the door that opend to get me on in my chair.

We went on Ratitoli Adventure, its like a simulater thing that I went on in my chair. That was also in the Walt Disney Studios Park, then we walkd arawnd and threw toy story land and then I had my photo took with Woody and Mickey Mouse. We walkd threw the studio bilding and it was like shops and ligts all lit up inside. The shops were accessible; they were good with a flat level floor. You coud get wheelchairs threw the tern stils in the park becose they had a specul gate that opend to get me in.

After that we whent to Disneyland Park and it had the same gates so I coud get in. We went to City Hall where we got some infamaction from to tell us what rides I coud go on in my chair, the ladey helpd us behind the desk so I new which rides I coud get a fastpas for. She gave me a specul green card that I showd when I wantd to go on a ride. 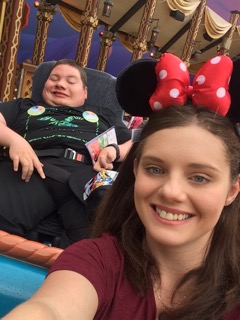 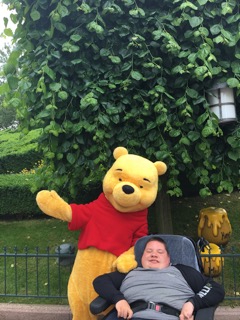 I could get on the Buzz Ligtyear ride in my wheelchair becose it had a specul traler to get my chair in, it had a specul door with a buten that you prest and it opend the door threw a arch  way, a accessible door to go threw to the ride. The man put a specul ramp down and daddy pushd me on. Daddy sat with me in the traler and he past me the gun so I coud do the ride. It was esy geting of the ride it was the same stop and we went threw the same door to get out. We whent to look at the photos at the photo boothe shop at the exit and we fawnd we was in the gift shop of Toy Storey. I went on the ride twise becose it was so good.

Then we whent on it’s a smal werld, I showd the man the card and then showd a ladey the card and then we waitd and they bort a boat rawnd with a ramp inside and they puld the ramp out on to the side and then weeled me on. I sat at the front and my familey sat with me in the boat it was good. Wen we got of it was esy we went back up the ramp and got of my front wheels got a bit stuk and cort. It wood be fine if you was in a electric but for manul chairs it was a bit steep. 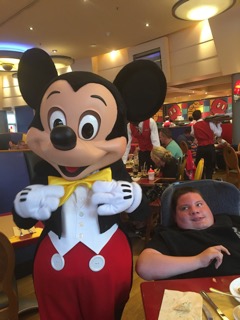 Then we went to Alice in wonderland maze we showd the ladey the card and she opend the gate and it went strayt in to the maze. I reley likt it daddy kept asking me which way to go.

I whent in a rocket simulater ride there was a man torking ferst then we whent into the studio and the ligts startd flashing red and sirns where going and then it startd shaking and it made fire and we all got wet and then there was a crash land and we exitd the ride.

There was a studio tor ride where I could get in the carige with my familey it was a good ride. It went to a seen where there was a lorry and worter came crashing out and it startd shaking me in the carige and you coud here the carige driving over the pipe that shuk the carige.

There wernt eney uther rides I cud go on in my chair so we whent on thos rides agen and agen. I met all the charicters and got their autgrafes and had pictures with them.

Disneyland was grate it was accessible for pepul in weelchairs but I wish there was mor rides I culd go on.

In school I have been doing my Duke of Edingburuh bronse with my frends. We went to Rufford Abby and Sherwood forist on our expedishons. I had to sleep in school and put up a tent with my groop and cook our diner on the trangiyer. We cookd pasta and tomato sauce for diner.

We startd our wolks by looking at the map of pictures and werking together to find the rite path. It was esey and we werked as a teem. We took photos when we wolked arawnd of accessibility and how it afects the inviroment. We had to have brekfast befor we left school and we made our own lunchs to take whith us. I reley injoyd D of E.

This website uses cookies to improve your experience while you navigate through the website. Out of these, the cookies that are categorized as necessary are stored on your browser as they are essential for the working of basic functionalities of the website. We also use third-party cookies that help us analyze and understand how you use this website. These cookies will be stored in your browser only with your consent. You also have the option to opt-out of these cookies. But opting out of some of these cookies may affect your browsing experience.
Necessary Always Enabled
Necessary cookies are absolutely essential for the website to function properly. This category only includes cookies that ensures basic functionalities and security features of the website. These cookies do not store any personal information.
Non-necessary
Any cookies that may not be particularly necessary for the website to function and is used specifically to collect user personal data via analytics, ads, other embedded contents are termed as non-necessary cookies. It is mandatory to procure user consent prior to running these cookies on your website.
SAVE & ACCEPT